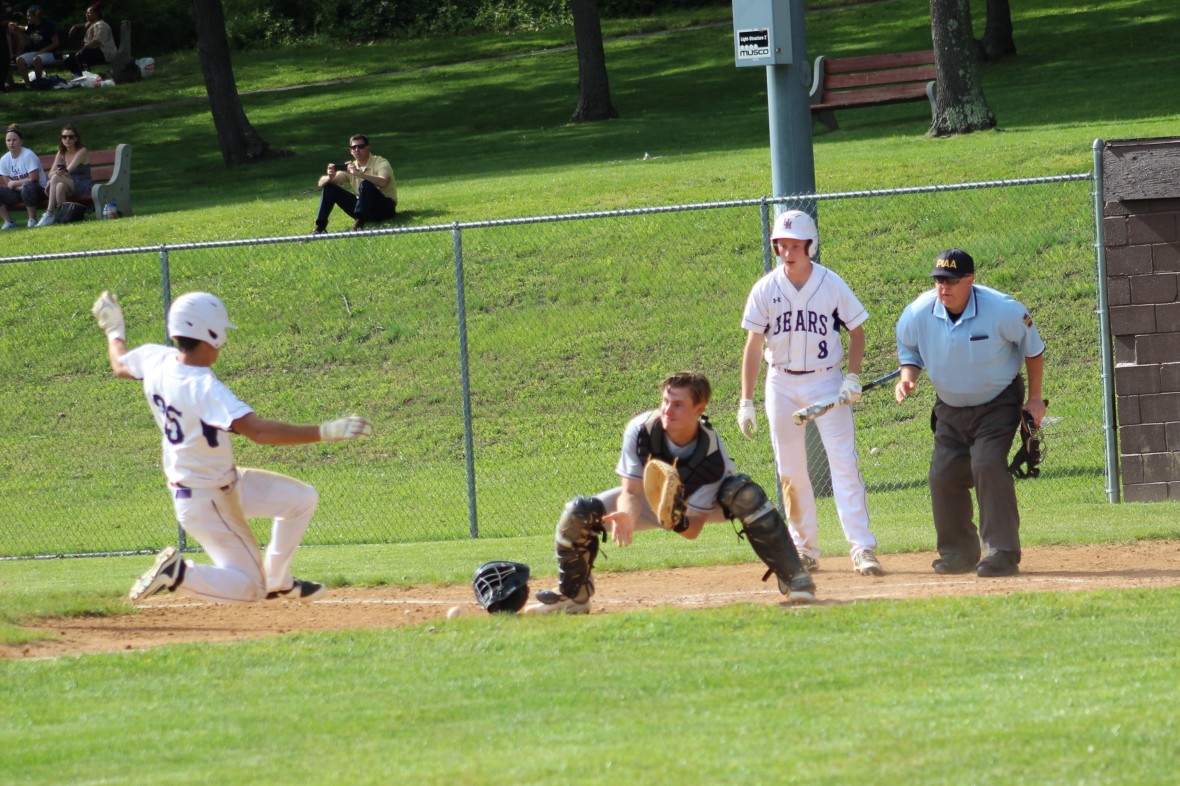 Upper Dublin 4, Upper Moreland 3
In the top of the eighth, Max Weinberg smoked the ball off the third base bag and into left. Justin Horn scored to put Upper Dublin up 4-3.
Horn held the lead by pitching a scoreless bottom of the eighth. He also scored three runs on Tuesday.
“He had a big game at the plate and on the hill. He did the job coming around on the bases, scoring some runs. He’s been the table setter all season,” Upper Dublin coach Ed Wall said. “We moved him to the top to get him more at-bats. He’s our best on-base guy. We had him in the three-spot. We hoped to have him drive in runs because he puts the ball in play.”
Weinberg bats third now. He drove in two runs on Tuesday.
“Max has been hitting the ball well,” Wall said. “He had a two-out RBI yesterday against Abington.”
Joey Monaghan had an RBI for Upper Dublin. JT Breslin scored a run.
UD starting pitcher Ryan Besachio allowed one hit and no earned runs in six innings.
“Ryan kept us in the game again. He did a great job. Ryan was in the zone the whole time. He was pitching to contact,” Wall said. “With only three Ks, we had to play good defense. JT Breslin made some great catches out there. Horn had a couple good plays at short. Hebling had a huge pick at first on a bunt that saved us. We did the job in the field for him, which was great to see as well.”
Upper Moreland’s Brandon Kohn scored two runs. Tommy Jacob scored one. Kevin Walder had one RBI.
Upper Dublin (6-13, 4-10 SOL) hosts Roman Catholic Wednesday at 3:45.
Upper Moreland improved to 10-4 in games that count toward the District One Class 5A Power Rankings. The Golden Bears are seventh in the rankings. Sixteen teams make the District One Class 5A playoffs.
Upper Moreland ended the regular season at 12-6 overall and 9-5 in SOL American play.
Upper Dublin 1-0-1-0-0-0-1-1 4
Upper Moreland 0-1-0-0-1-0-1-0 3 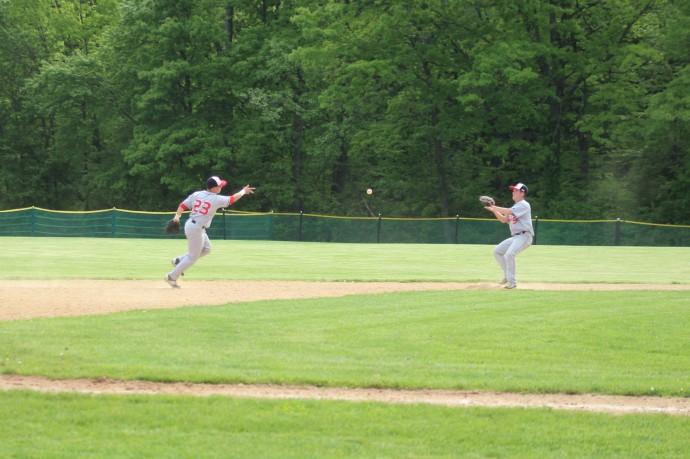 “Powered by Narrative Science and GameChanger Media. Copyright 2017. All rights reserved.” Any reuse or republication of this story must include the preceding attribution. from: https://gc.com/game-58c88f3fe87c6700207c04c7/recap-story 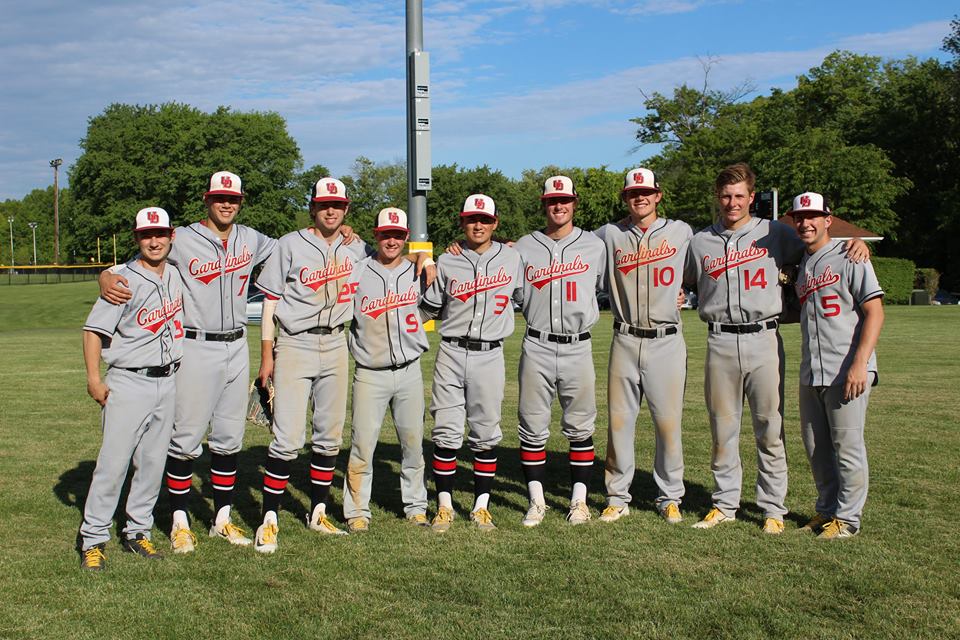 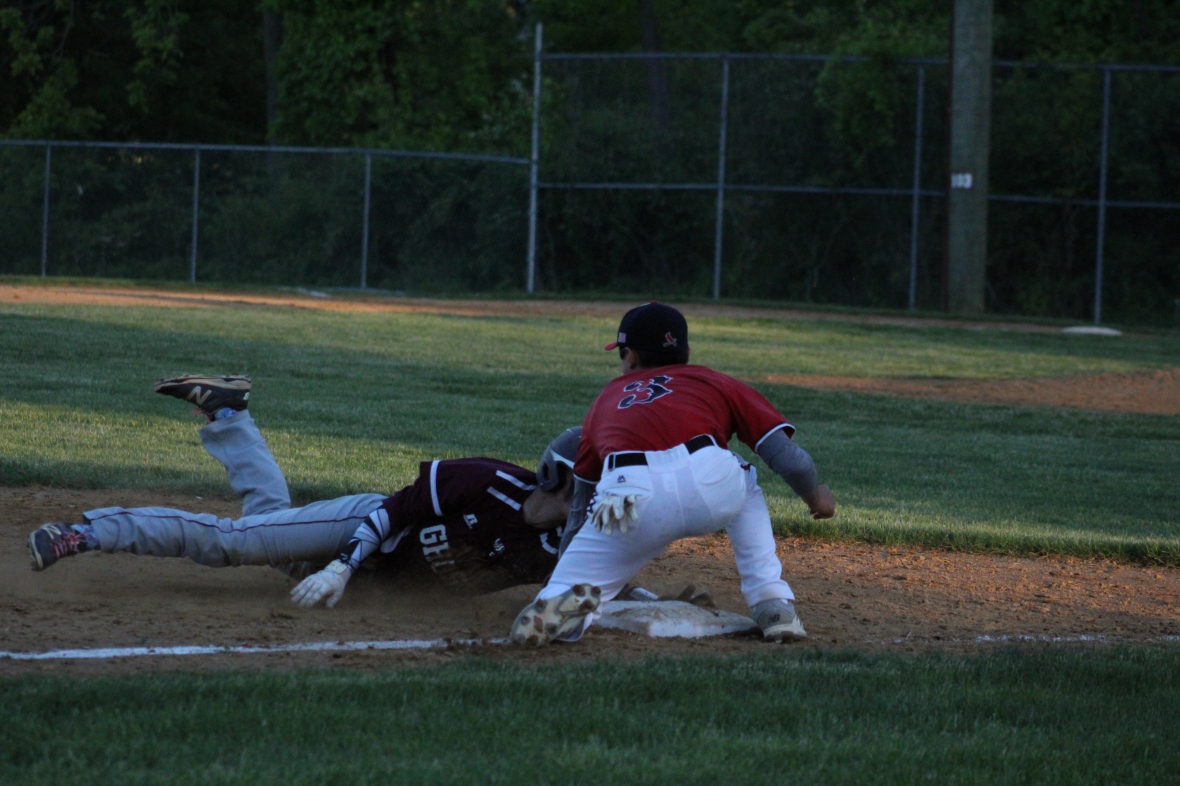 Upper Dublin Cardinal Varsity LIVE had trouble keeping up with Abington in a 6-2 loss on Monday.

Upper Dublin Cardinal Varsity LIVE knotted the game up at one in the bottom of the first inning. Max Weinberg singled on a 2-0 count in the first inning, scoring one run.

Nolan earned the win for Abington. He went two-thirds of an inning, allowing zero runs, one hit, striking out one, and walking zero. Joey Monaghan took the loss for Upper Dublin Cardinal Varsity LIVE . He pitched one inning, giving up one run, two hits, and walking zero.

Weinberg led Upper Dublin Cardinal Varsity LIVE with one run batted in. He went 1-for-2 on the day.

Abington had nine hits in the game. Kelly and Adkins each collected multiple hits for Abington. Adkins went 2-for-4 at the plate as he led the team with two runs batted in. Abington tore up the base paths, as two players stole at least two bases. Mcclay led the way with three.

“Powered by Narrative Science and GameChanger Media. Copyright 2017. All rights reserved.” Any reuse or republication of this story must include the preceding attribution. From: https://gc.com/game-58c88f1dd840a8001de3228c/recap-story 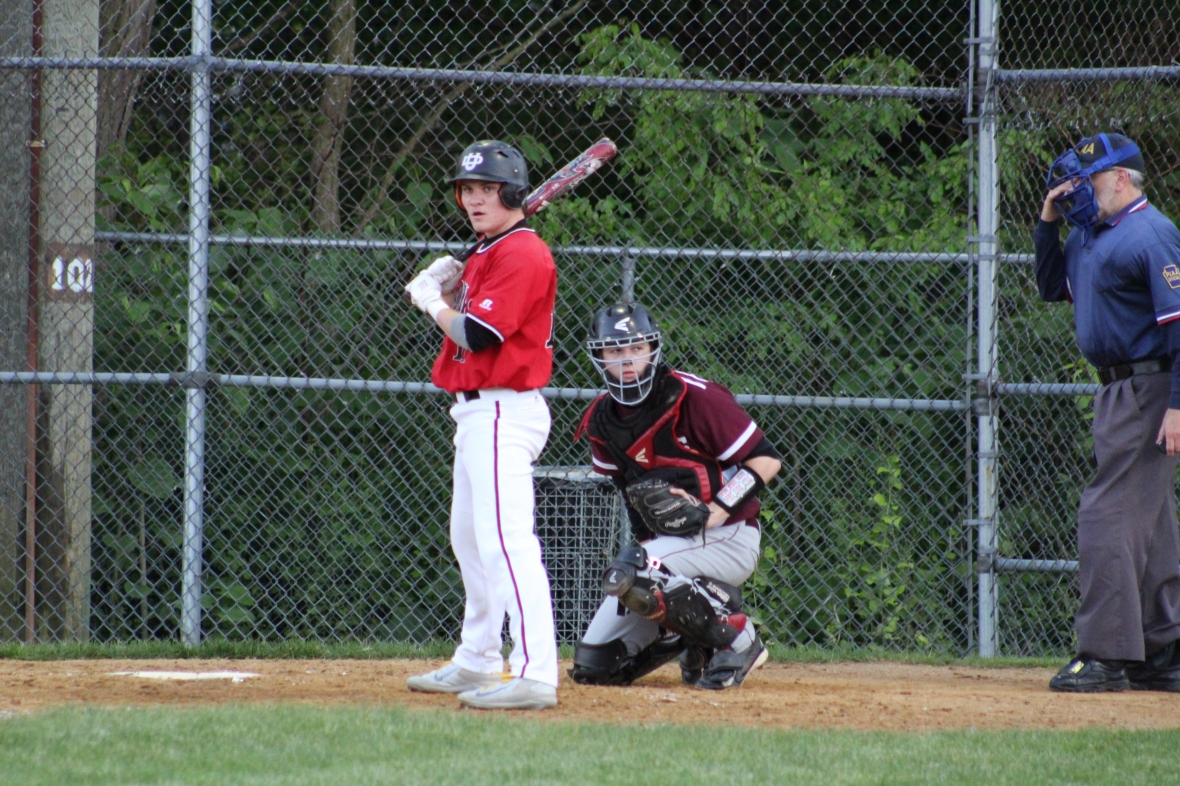 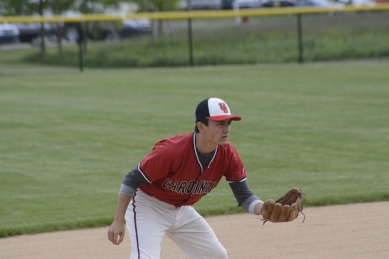 There’s a wealth of arms, and then there’s what the Hatters are working with. After 17 games, the Hatters’ pitching staff boasts a 0.99 earned run average. In 13 league games, the number is an even more miniscule 0.30.
“It’s been something else,” coach Pete Moore said. “We’ve given up eight total runs in 13 games.
“I’ve had really good pitchers. I’ve had Division One pitchers that have gone to Penn and Delaware and St. Joe’s and Seton Hall, but I’ve never had a staff that’s done what this staff has done as a group. It’s just incredible.
“At every level of baseball, it just comes down to, if your pitchers can throw and if you play good defense, you’re going to win games. We’ve been fortunate to have guys that can dominate the strike zone, and it’s really paid off.”
Alex Crim made sure things kept rolling, pitching Hatboro-Horsham to its fifth straight shutout, scattering seven hits over his seven innings of work. The junior, who is the third man up in the Hatter’s rotation, also struck out eight batters and threw 65 of his 95 pitches for strikes.
“I’ve been telling people about this kid we threw today pretty much all year – he’s in a

situation where he’s not getting as many innings as he would anywhere else just because of what Edge (Brian Edgington) and (Colin) Kennedy have been doing,” Moore said. “He’s a number one for a lot of people. Today was his first opportunity to get a league start. He went out and threw a shutout for us in a win that clinched at least a share of the league title.”
The Hatters can clinch sole possession of their first conference crown since 2012 when they travel to Cheltenham on Tuesday.
“Clinching a share of the tile is exciting,” Moore said. “We take a lot of pride in knowing that 2017 will hang on the baseball banner in the gym at Hatboro-Horsham forever.
“I have been coaching for 16 years, and that’s only the second time that we can say that. However, this group is greedy. They aren’t interested in sharing a tile. We want to win it outright on Tuesday.”
Eric Jester provided enough offense with a two-run double in the fourth inning while the Hatters tacked on an extra run in the fifth, thanks to Ryan O’Donnell. Colin Kennedy went 3-for-4 while Shaun Thomas racked up two hits.
Justin Horn took the loss for the Flying Cardinals and was one of three players to record two hits offensively along with Jason O’Gara and Joey Monaghan
Hatboro-Horsham (13-4, 11-2 SOL) will travel to Cheltenham on Tuesday, and Upper Dublin (5-12, 3-10) will be on the road at Abington on Monday for a non-league game.
HATBORO-HORSHAM 000 210 0 – 3 7 1
UPPER DUBLIN 000 000 0 – 0 7 2 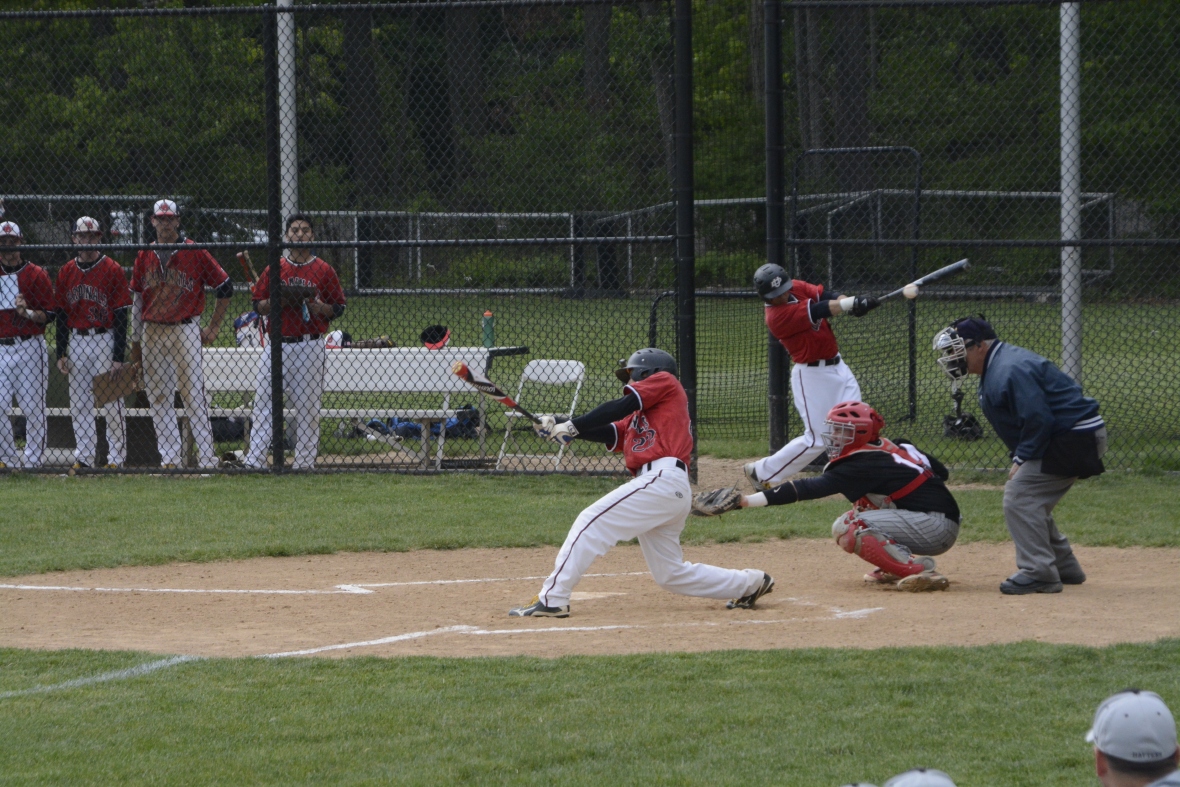 Both teams were strong on the mound on Friday, but Hatboro-Horsham was just a little bit stronger at the plate in a victory over Upper Dublin Cardinal Varsity LIVE on Friday. 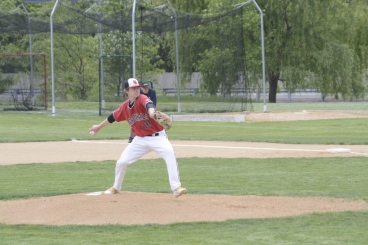 A Crim earned the win for Hatboro-Horsham. He threw seven innings, giving up zero

“Powered by Narrative Science and GameChanger Media. Copyright 2017. All rights reserved.” Any reuse or republication of this story must include the preceding attribution.  from: https://gc.com/game-58c88ed845ce6d001a8a4dec/recap-story

Springfield Township 4, Upper Dublin 3
The game was tied at three going into the bottom of the eighth. Tim Dahme walked on four pitches. Then he advanced to second on a passed ball.
Nick Pave grounded out to first, moving Dahme to third. Then Brian Murphy hit a grounder to second. The second baseman threw wide to first. Dahme charged home with the winning run.
“We put the ball in play with two outs. It was a tough play for the second baseman. He fielded it cleanly and just threw wide of first,” Springfield coach Dennis Primavera said. “The game was going our way. We should have put it away in the seventh.”
Upper Dublin tied the game at three in the top of the seventh. JT Breslin hit a grounder off the third baseman’s glove. Julian Gimbel scored.

The Flying Cardinals took a 2-0 lead in the top of the third. Matt Hebling grounded out to second, scoring Gimbel. Breslin singled to short, scoring Justin Horn.
Springfield answered with three runs in the bottom of the third, taking a 3-2 lead. Jackson Pauwels doubled to center, plating Robert Demerlis and Chris Kelly. Then Pauwels scored on an error by the first baseman.
That set the stage for the late inning drama.
Springfield was in position to win because starter Nick Pave allowed two earned runs in seven innings. He fanned eight. Dahme pitched a scoreless eighth.
“He pitched another good game. We never support him. He’s a gamer but he stays with it,” Primavera said. “Tim has pitched well this year, too.”
Upper Dublin starter Tommy Reilly gave up no earned runs in seven innings.
Primavera thinks this win keeps Springfield in the hunt for the District One Class 4A playoffs. The Spartans are fifth in the power rankings, and four teams make the playoffs. 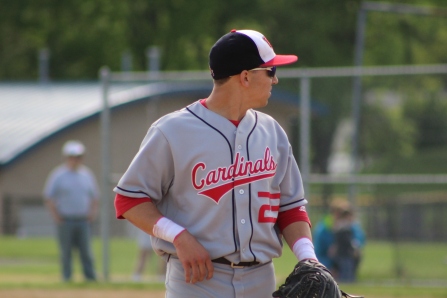 “Powered by Narrative Science and GameChanger Media. Copyright 2017. All rights reserved.” Any reuse or republication of this story must include the preceding attribution.  from: https://gc.com/game-58c88ea3d94b460022726ae1/recap-story

COUNCIL ROCK SOUTH 14, UPPER DUBLIN 0 (5 innings)
Michael Rabayda and Sean O’Brien combined for a one-hit shutout in an abbreviated non-league game against the Flying Cardinals. Rabayda was impressive in his varsity debut. The freshman hurler did not allow a hit in 3.2 innings, striking out three and walking one.
“He pounded the zone,” coach Ted Kirner said. “He did a great job.”
O’Brien allowed one hit and struck out one in 1.1 innings.
The Golden Hawks scored a run in the first and then put the game out of reach with 12 runs in the next two innings.
Evan Fisher had a big day at the plate with a 3-for-4 effort that included a double, four RBIs and a run. Josh Kim was 1-for-1 with a double two RBIs and two runs scored. Contributing one RBI each were Matt Smith (1-for-2, two runs), Shane Walter, Eric Jeronis, Joe Shragher (1-for-2, RBI, two runs).
Julien Gimbel accounted for the Flying Cardinals’ only hit.
Council Rock South (9-8, 5-4 SOL) will travel to Pennsbury on Wednesday, and Upper Dublin (5-10, 3-8) will be on the road at Springfield Township.
Upper Dublin  000 00   0-1-3
Council Rock South     157 1x   14-8-1

Upper Dublin trailed 2-0 going into the top of the third. Then the Flying Cardinals scored two runs to tie the game. Justin Horn scored on an error. JT Breslin scored on a passed ball.
Upper Dublin went up 3-2 in the fifth. Matt Hebling scored on a passed ball. UD scored three more in the seventh. Breslin grounded into a fielder’s choice, scoring Julian Gimbel, the first run of the inning.
Then Max Weinberg lined a single to center, plating Justin Horn. Then Joey Monaghan stroked the ball to left, scoring Breslin.
“We put together a couple good innings. We had a tough time timing their pitcher. He kept us off-balance,” Cardinals coach Ed Wall said. “We were able to square a couple up and they brought in a reliever, and our guys liked him a little more.”
Upper Dublin scored three runs off both of PW’s pitchers. UD starter Ryan Besachio allowed two runs in six innings. He fanned five. 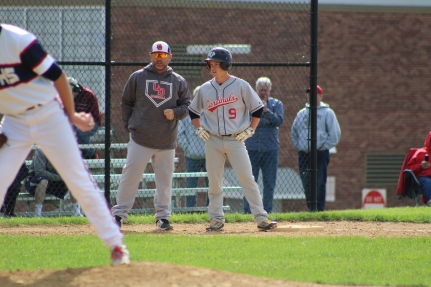 “Powered by Narrative Science and GameChanger Media. Copyright 2017. All rights reserved.” Any reuse or republication of this story must include the preceding attribution.  from: https://gc.com/game-58c88e64080426001dc61538/recap-story